From Seed to Feed to Fork!

The business of agriculture begins with the science of soil and the science of crop production. Agronomy is the first link between soil and food production. Good management decisions and attention to detail in the field will lead to profitability, as the success of all crops is determined by their yield and quality.

Bretts adopt the most recent research and cutting edge technology to offer grain growers a first-class agronomy  service that is practical and environmentally sustainable. 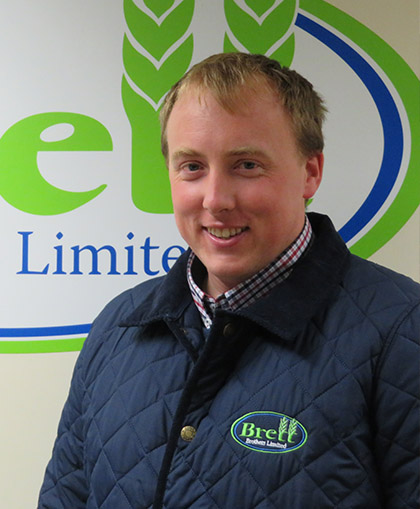 James Irish joined Bretts as our Agronomist in 2013. James’ primary degree is in Agricultural Science and he also completed a research Masters in Crop Science, in the area of innovation and support in farm advisory. During his Masters he developed a widely adopted machinery cost calculator. At this time he worked as part of the Teagasc Tillage Advisory team based at the home of the national centre for arable crops research in Oak Park.

James is a registered pesticide advisor with the Department of Agriculture, an accreditation that relates directly to standards in the pesticide and crop protection industry. Within his portfolio James advises grain growers on best practice to maximise crop yields in a cost effective way, with the least impact on the environment. As well as offering advice to our tillage farmers, James also has input into the Ruminant Support Team in the area of soil fertility and spray programmes to improve productivity of grassland.

© 2020 Brett Brothers Ltd. All Rights Reserved. T&C + GDPR Compliance Site by CloveRock Design.
We use cookies to ensure that we give you the best experience on our website. If you continue to use this site we will assume that you are happy with it.Ok